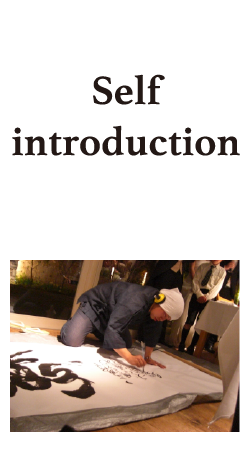 In addition, he performs personal exhibitions, events, lectures, and more!
“I want to be popular” was his early, misguided motivation that pushed him to start his career. Today, however, he does his best on each piece, hoping that his work will make people smile and share pleasure as he creates his messages, which are based on his experiences and encounters with many people.
Even though his influence is not strong enough to accomplish his passion, he does everything he can, step by step, believing that even his small power is enough. He values those small steps and bringing people happiness.
We hope that you will invite Minoru Goto to make your days special. He can spend some time with you and fill your world with smiles and happiness.

He started learning calligraphy when he was in the first grade
In 2005 he was influenced by an encounter with a street poet and he started to educate himself to create calligraphy with brush and sumi-ink.
In 2009 he started performing his calligraphy in the streets around Shinjuku Station.
ince then, he has been travelling the world and performing his calligraphy. He has traveled to more than 100 cities in Japan and 20 other countries in Europe and Asia.
He has created works of calligraphy for more than 50,000 people.
He opened his atelier and gallery, “Minoru-An” in November, 2014.
He received the ”The Steve awards” international award winner in August, 2016
He appointed as a tourism ambassador in Takacho-Hyogo Prefecture in November, 2019